Elongated vs Round Toilet – Pros, Cons, Comparisons and Costs 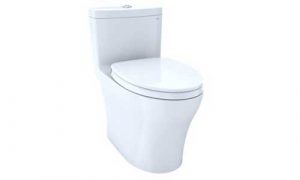 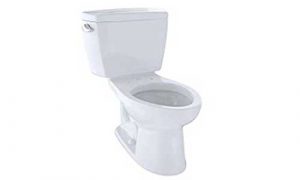 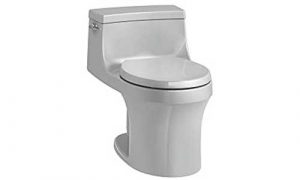 Elongated vs. Round Toilet: What Are the Differences?

Toilets will always be perhaps the most important key component of every bathroom.

That’s why several factors, including bathroom size, design, and needs, have to be considered before purchasing or replacing a toilet.


One of the main characteristics homeowners look for in toilet bowl is their shape – round or elongated.

Due to their size difference, one may fit perfectly in your bathroom while the other won’t.

For example, if you have a smaller space, a round-shaped toilet bowl can fit your bathroom flawlessly, but an elongated one won’t.

However, despite that, these two toilet bowls still function the same.

Furthermore, some people actually prefer one over the other.

In this article, we’ve highlighted the factors between an elongated toilet bowl versus a round-shaped toilet bow to help you decide which one suits your bathroom best.

We also included some best buys that you can pick from in case you still can’t find the perfect toilet for you. 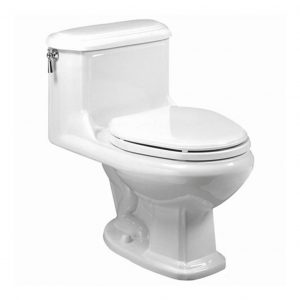 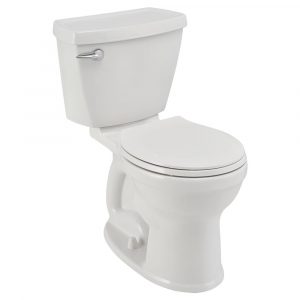 The first thing you’ll notice in these toilet bowls is their price.

At most stores, round-shaped toilets cost roughly $180, while elongated ones from the same brand and style would cost $230.

On average, elongated toilet bowls are approximately $50 more expensive despite having the same design and manufacturer as the round-shaped toilets.

Besides the actual costs of the toilet itself, you should also consider the costs of installing them.

Experts say that a toilet installation can cost around $45 to $130, depending on your pipes’ condition and bathroom area.

However, in the long run, both toilets consume the same amount of water, which means you won’t have to worry about water costs in the future because they’ll still be the same despite the type of toilet you have.

Toilet manufacturers have been making both round and elongated toilet styles for a long time.

But these shapes don’t affect how they style the toilet bowls, which means you’ll still see the detailings on the lid or the skirted bottoms on them.

The only thing noticeable in its design would be the shape itself.

For example, a round-shaped bowl looks like a true circle, which means it doesn’t extend much into the room, making it perfect for older and smaller spaces.

On the other hand, an elongated toilet extends more into the front part of the room; that’s why it’s best used in bathrooms that have more space. 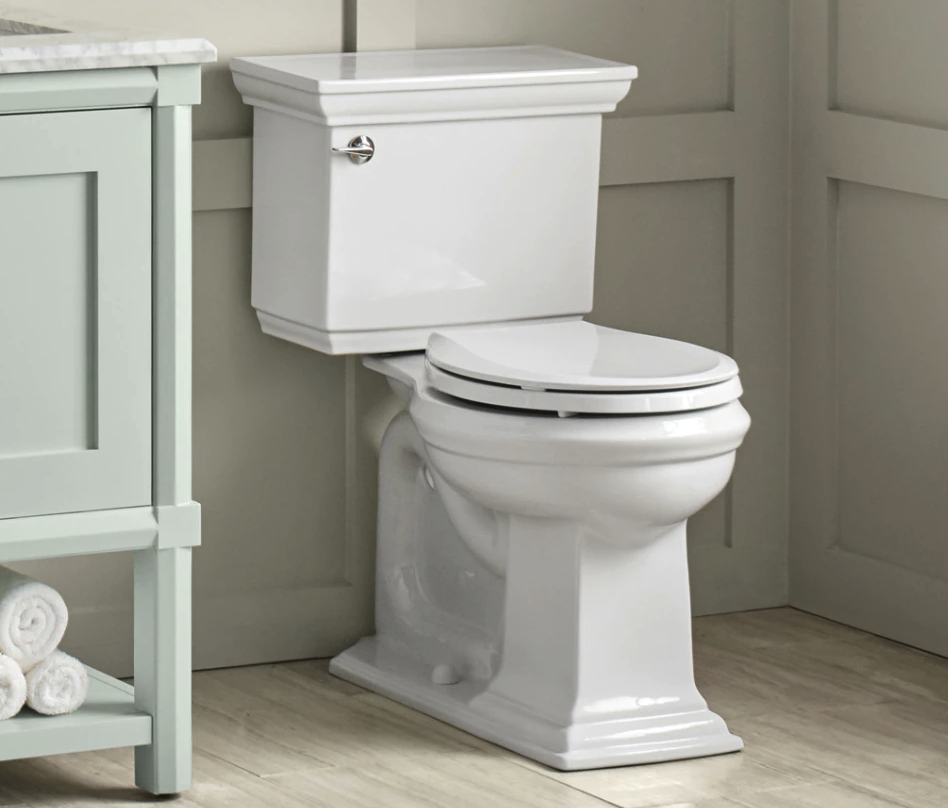 It’s not called a comfort room for no reason.

In fact, comfortability is another factor to consider when choosing a toilet shape.


Elongated shaped toilets tend to be more popular because users say they are more comfortable than the round styles.

If you have disabled family members or children around the house, then the elongated toilet would be great for your home as it would be easier for them to use because of the wider area.

Another factor to consider when buying your next toilet would be the scope of measurements your bathroom would be.

An elongated bowl can be around 2-inches longer (in its front) than a round-shaped one to give you an idea.

However, some brands make an optional toilet-sized half of an elongated and round bowl.

In case you didnt’ already know this, most toilet sizes cover 21-inches of a room as per the building code requirement of towns and municipalities.

But for ADA-compliant bathrooms, you would be required to leave around 48-inches of space for the toilets.

That’s why smaller bathrooms use round-front toilets to pass the building code since they’ll use up a smaller space as well.

In terms of maintenance, round-shaped toilets are more accessible to manage and clean than elongated ones.

This scenario occurs because some manufacturers put more crevice areas around the outskirts of the toilet, which makes it more challenging to clean and brush through.

However, with a longer elongated bowl, anyone can easily clean it because it’s simpler to look into the front part of the toilet. 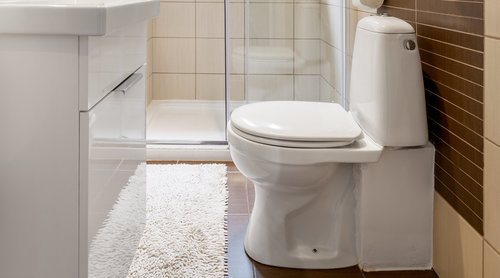 With technology advancing day by day, many kinds of flush mechanisms already exist.

From double-cyclone flushes to pressure-assisted ones, each toilet has its unique process of flushing.

For elongated toilets, better pressure applies to them because of their shape.

This scenario happens because the water circulates better with the amount of space they have to pass through.

But in other kinds of flush mechanisms, there isn’t much difference between them, which means you have nothing to worry about as both toilets can flush properly despite their shape.

Before buying your next toilet, you should also assess how easy the setup process goes.

Thankfully, you can set up both toilet bowls the same way.

Here is the standard way of installing toilets to give you an idea about how it’s done.

Note: Elongated bowls tend to be cumbersome to move around and lift in other flush mechanisms, unlike the round ones.

With hundreds of different toilets in the market, it’s inevitable to feel overwhelmed and confused about which toiler bowl you should invest in for your bathroom.

That’s why we made sure to add our best buys and added why you should buy them based on their style and functionality. 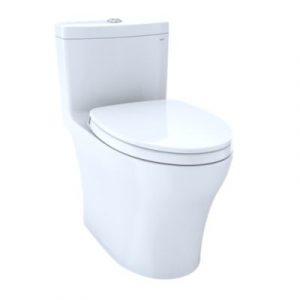 The best overall buy among our toilets on the list would be the Toto Aquia IV Elongated Dual Flush Toilet!

The reason would be simple – this toilet comes with an ultra-smooth surface which means it can last longer and cleaner.

Its quiet flush technology, and its powerful two flush options, also don’t disappoint because these functions let you use less water.

Also, this set comes with an anti-slam seat that can help protect your toilet from breaking easily. 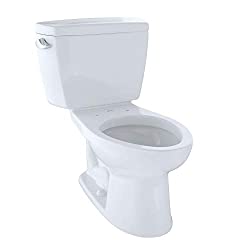 If you are trying to save some bucks while shopping for your next toilet, maybe it’s time to consider the Toto Drake Elongated Toilet.

With its comfortable height, this two-piece toilet would be perfect for those homeowners looking for an elongated bowl but on a tight budget.

It also has a low water consumption and powerful flush, which means you don’t have to worry as well about the water costs in the long run.

Lastly, this value toilet also has an eco-friendly clog-resistant that makes it worth every buck. 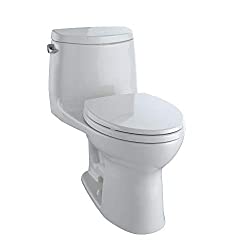 With its sleek design and convenient flush technology, the Toto Ultramax One-Piece still stands on our list.

It’s also easy to clean, has a clog-resistant mechanism, uses less water, and follows the ADA compliant when it comes to size and its measurements.

This toilet also has an incredible surface that can help it last longer than you can imagine. 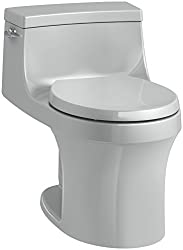 Kohler is a brand familiar to most homeowners because of its high-quality products.

That’s why our best overall buy goes to Kohler San Souci Round Front One-Piece Toilet, which can fit into any space.

It also uses less water and has an efficient flush technology.

Also, this toilet comes with a quick-release seat, which means it won’t easily break in the future because there won’t be much pressure applied to your toilet as you get up from it. 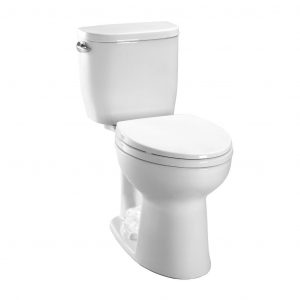 Another toilet from Toto makes to our list and it’s the Toto Entrada Round Front bowl!

This toilet might be a basic one, however, it has a strong flush and uses lesser water consumption than others in the market.

Its modern and sleek look also makes it a crowd-favorite because you would see how the company didn’t compromise its quality despite its price. 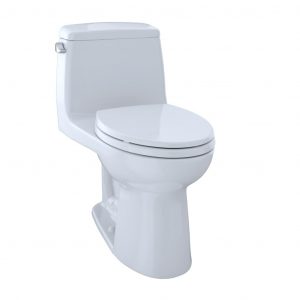 Last but not least on our list is the Toto Eco Ultramax.

Similar to its name, this toilet is a great and functional one-piece bowl with amazing flush technology.

It helps you save water costs in the future with its low water consumption mechanism.

Also, the toilet uses a wider trapway, which prevents any clogging whenever you use it.

In the end, it still depends on your preference whether you’ll have a rounded or elongated toilet bowl.

But don’t forget to assess your choice depending on the price, style, comfortability, scope of measurements of your bathroom, maintenance, flush capabilities, and set-up process before you decide.

And if the decision takes longer than you thought, you can also refer to our best buys and choose from it your next toilet for your new bathroom.

Rommel enjoys writing about Accessories, New and Established Watch brands and Men's trending styles. He enjoys reviewing and going in-depth into build quality and craftsmenship of accessories, as well as up-and-coming fashion trends. Rommel has a good eye for details and has worked with StyleWithinReach on a contract basis. 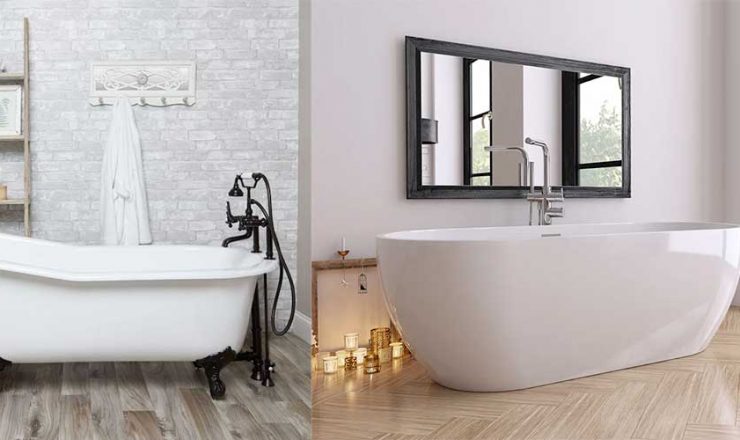 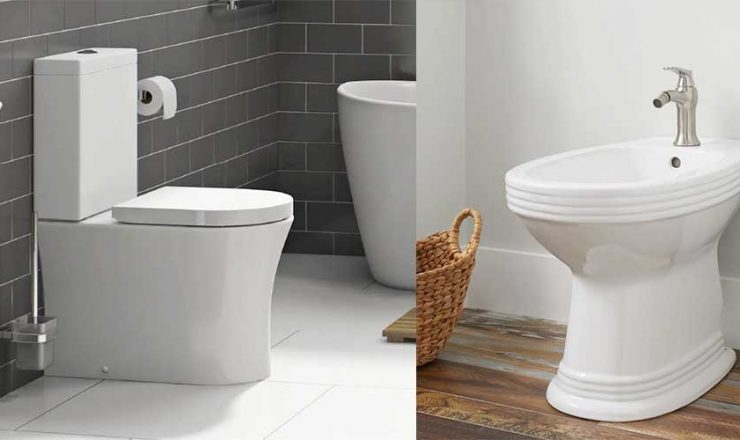 Washlet vs Bidet – What are they & Which one is better?